The Big Knitathon campaign launched on the 2nd August, aims to encourage Bath’s knitting population to unite in order to raise funds for The Big Issue Foundation, and will form part of a nationwide attempt to break a Guinness World Record for the most people knitting simultaneously. 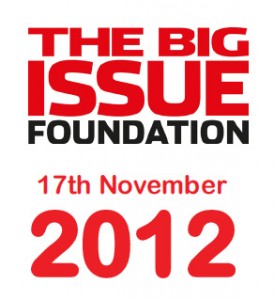 Part of a wider campaign across the UK – to raise awareness of the Foundation’s work and of homelessness – teams of knitters in Bath, and across the country will pick up their fundraising needles on Saturday 17th November between 2pm-6pm. Knitters are invited to attend the local campaign’s event, which will be held at St Michael’s Without church, on Broad Street.

In conjunction with the Big Issue Magazine’s 21st birthday celebrations, The Big Knitathon is a new venture for the charity, which has previously held other fundraising drives such as The Big Sleep Out. The team of knitters at St Michael’s are hoping to produce a large volume of knitted squares – which can be made into a patchwork blanket after the event. It is hoped that this blanket will be put on display to continue to raise further awareness of homelessness in Bath. The world record event will start at 2.30pm.

The Big Issue Foundation is a national charity that connects vendors with the vital support and solutions that enable them to rebuild their lives and journey away from homelessness.

The event at St Michael’s, sponsored by Sharon Spencer of Great British Yarns – a mail order knit company supplying the wool for the campaign – will kick off with a talk from Samantha Grief, Vendor Service Broker at the Foundation’s office on Bridewell Lane. Ms Grief will then introduce a vendor who has agreed to share their story.

Ms Grief said;
“The Big Knitathon is a great way to have fun whilst raising vital funds for the Big Issue Foundation and helping some of our city’s most vulnerable people take those all-important first steps into changing their lives. The Foundation’s work in Bath makes a significant difference to the lives of local vendors by helping them achieve their goals, learning new skills, reconnecting with their families and moving into permanent employment.”

Lizzy Ellery from DWP Public Relations, Bath, is spearheading the organisation of the event and said;
“People of all ages, genders, and knitting abilities can get involved and events can be held in churches, libraries – or even living rooms! Knitathon events are simply about communities and friends getting together to raise as much sponsorship possible to donate to The Big Issue Foundation. You can get involved with our attempt to make a blanket or knit anything from a hat to a jumper – and you could even donate what you make to your local vendor.”

Nearly 100 people a week turn to the Big Issue for an opportunity to help themselves at a time of personal crisis, and The Foundation strives to support 2,500 vendors across the country. Vendors make a personal choice to buy their magazines with their own money, taking charge of their finances and sales whilst developing the skills required to retail to the public. This addresses the problem by offering homeless people the opportunity to earn a legitimate income; to ‘help them to help themselves’.

For those interested in holding their own event, an event pack is available. For more information about the event and campaign in Bath, or an event pack, email knitathonbath@gmail.com, or contact Samantha Grief at the Big Issue Foundation Samantha.grief@bigissue.com. You can also follow the campaign on Twitter at: @BigKnitathon.