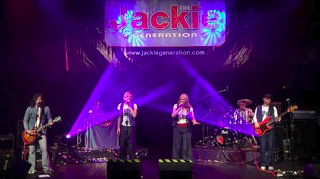 ‘The ultimate tribute to the sensational ’70’s!’

Live in concert, all your favourite ’70’s chart hits performed by this amazing 6 piece band who are storming the UK.


‘The Jackie Generation’ are a 6 piece outfit with both male & female lead vocals. Featuring, the incredible ex ‘Abba girl’ Janey Bombshell, arguably one of the finest female singers in the UK, & co lead vocalist Karlos Vox, who played the lead role in productions including Tommy’ ‘Rent’ & ‘Jesus Chris Superstar’. Musicians include guitarist Greg Hart, who has played with bands such as ‘ Asia’, ‘Flairz’, & ‘Limehouse Lizzy’, ‘Ultravox’ & ‘Boogie Wonderland’ Bassist Gary Williams, ‘Bad Boy Boogie’ AC/DC drummer/vocalist Stevie Weaver, & the wizardry of keyboardist/Vocoder Andy Stewart, who has been musical director on many top theatre productions on the South Coast, and is the grandson of the late great Arthur Askey!

With a set list boasting an impressive range to suit all ages, with the emphasis on great ‘hit’ songs and dance-ability. ‘The Jackie Generation’ play up to 2 x 1 hour sets including some classic hits from the 70s that most bands would not dare to attempt! 10cc, John Miles, Wings, ELO, Andrew Gold, The Sweet, & even ‘War of the worlds’! Obviously the band add in some cracking party tunes in the second half to get people up and dancing. From Abba, Suzi Quatro, Boney M, The Osmonds, The Buggles, Elton John, Kiki Dee, Queen, Tony Christie, Olivia Newton John etc. You cannot help but join in the fun!

The band wear genuine 70s costumes with all the glitz and blitz you would expect from this colourful era of denim, satin & leather. Plus with a massive backdrop, complete with original ‘Chopper Bikes’ (stage size allowing), this show really is not to be missed. The ultimate trip back in time to when “Pop was at it’s peak”!

The band are due to release their debut album in April 2011. Called ‘FABTASTIK’ , it contains 12 classic 70s smash hits, including ‘Crazy Horses’, ‘Xanadu’, ‘Video Killed The Radio Star’, and the crowd favourite, Andrew Gold’s classic ‘Lonely Boy’ amongst many..

It will be promoted at all live shows throughout the year, and also on sale via the band website at: www.jackiegeneration.com