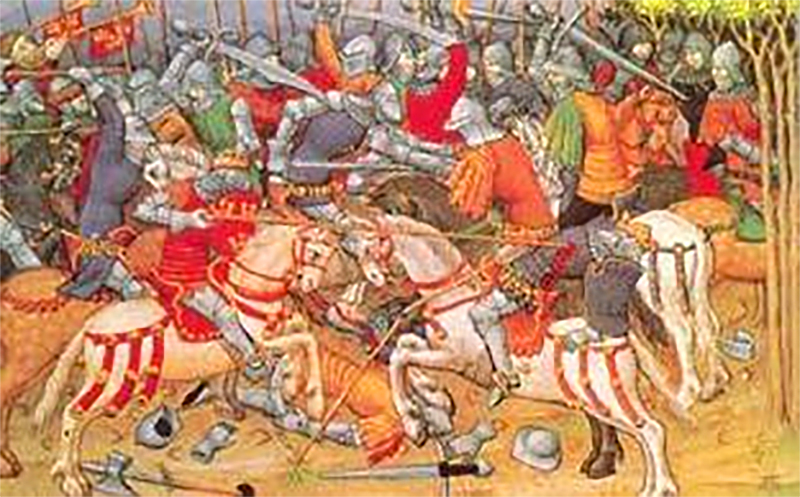 Bath is well known for being the site of the legendary battle of Badon, which the Welsh annals say was the twelfth and greatest battle fought by Arthur against the invading Saxons. Known as the ‘Siege of Badon Hill’, the exact site of the battle was probably the refortified Celtic hillfort at Bannerdown, where farmers are reported to have apparently ‘dug up cupfuls of teeth’. The battle was at turning point for Arthur and Britain. By not only defeating but also reversing the initial aggressive thrust of the Saxons, Arthur may well have saved the Celtic population to the West. According to the great Dark Age historian Nennius ‘960 men were killed by one attack of Arthur and no-one save himself laid them low’.

Bath finally fell to the Saxons at the Battle of Dyrham Park just to the north of the city. Although the great Roman temple and baths were lost to flood and ruin, Bath continued as an important religious site with the founding of a Saxon monastery in the 7th century. As its lands increased, the monastery grew rich and powerful. King Edgar was crowned in splendour in the new monastery church of St Peter in the 10th century, reflecting Bath’s new status as one of the leading cultural and religious centre’s of Wessex. In the late Saxon era, Bath was fortified against Viking attack and operated its own mint. Even under the French Benedictines, the monastery continued to flourish; but with the death of William the Conqueror, the hated William Rufus took control.

A Norman doctor turned churchman, John De Villula bought the ruined City of Bath for 500 pounds of silver. Instituted as the Bishop of Bath, Villula started to build a new cathedral on the burned Saxons abbeys ruins. With typical Norman ambition, the huge 100m long cathedral was to be one of the largest in Europe. The present abbey occupies only its nave. Villula also extended the monastery, whose collegiate school was widely renown for its scholarship. But the most important was his interest in the therapeutic qualities of Bath’s hot springs. He ordered the baths to be refitted and built treatment centres in the city. The wool trade and cloth making maintained Bath’s wealth. Although badly hit by the plague, Bath continued to prosper and the old city walls were rebuilt. Yet Villulas enormous cathedral was near ruined by neglect. Not until a dream about Jacobs ladder inspired the 16th century Bishop King was it rebuilt. Legend recounts that Bishop King was impelled by a great voice from Heaven which said ‘Let a King restore the church…….’; though it was rebuilt to a much smaller scale.

The great 16th century traveller John Leland was inspired by Bath’s Roman ruins but not at all impressed by the hot water which ‘rikketh like a sething potte’, apparently. The waters fed four baths to cater for the many afflicted who came to Bath for their cures. Royalty and gentry enjoyed the King’s Bath, built above the Great Bath of Roman times and the major attraction, once the cathedral and monastery were ruined. But in contrary the Cross Bath was foul. Contemporary accounts recoil in horror at the thought of diseased men and women bathing naked together while onlookers jeered and threw animals into the bath.

From its magnificent Roman origins as a spa town, Bath became ‘sumwhat decayed’, as the late-medieval traveller John Leland wrote. The baths themselves began to lose their glory; many complained that only the sick now came to enjoy the waters. The streets were also far from pleasing to the eye. According to Baths famous architect John Wood ‘Soil of all sorts, and even carrion, were cast and laid in the streets, and the pigs turned out by day to feed and rout among it; butchers killed and dressed their cattle at their own doors; people washed every kind of thing they had to make clean at the common conduits in the open streets ….’