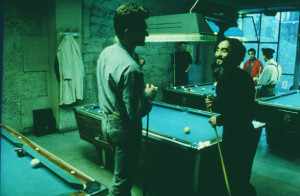 Explore the creation of a collection

Fashion. I’ll have nothing of it. At least that was my first reaction when the Centre Georges Pompidou asked me to make a short film in the context of fashion… (but) maybe fashion and cinema had something in common. – Wim Wenders
Although initially struggling with the brief, Wenders settled his focus on a designer whose work he had admired for a long time, Yohji Yamamoto.
Starting as a relatively straightforward interview piece, the film gradually changes from purely a discussion about our relationship with fashion to a study of visual representation, creating a dialogue between the language of fashion and that of film, both rapidly changing forms of communication.
Moving between Yamamoto’s two bases of Tokyo and Paris, the film explores the creation of a collection and sees things through to its fashion show premiere, noting en route both the designer’s and the filmmaker’s enthusiasms for new developments in expressive possibilities.