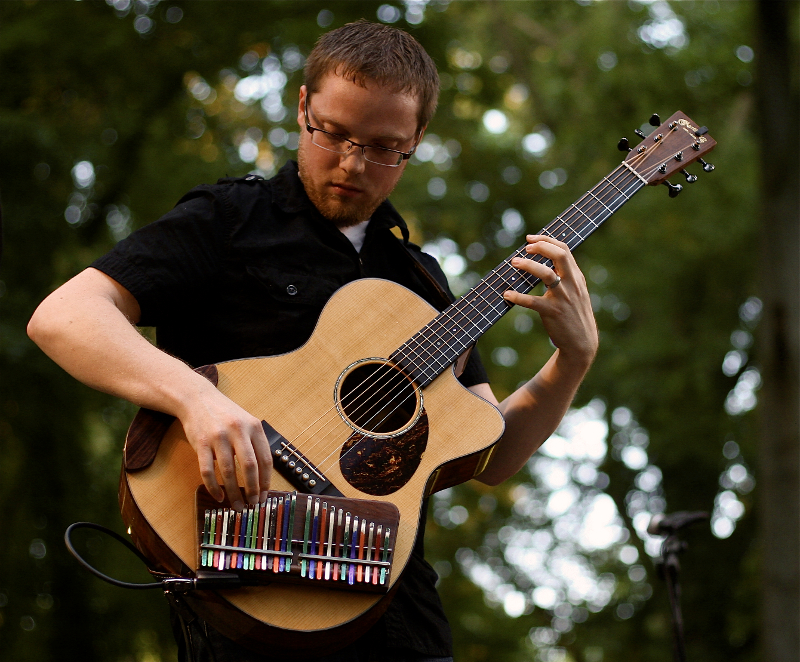 An evening of ground-breaking acoustic guitar

From the outskirts of Philadelphia PA, Trevor is an acoustic instrumentalist whose compositions range in style from driving rhythms to soft melodic phrases.

Trevor has collaborated with various builders to redesign an instrument called the kalimba, which mounts to the surface of the guitar. Compositions inspired by the pairing of the two instruments can be heard in Trevor’s Candyrat Records debut “Entelechy”. Upon its release, this album climbed the iTunes Singer/Songwriter charts, as well as YouTube Top Commented/Top Favorited/Most Discussed categories with the release of videos.

His music has been featured on various national radio stations including NPR and television networks including NBC. Trevor performs throughout the USA, Canada, and Europe.

Reviews:
“…In the genre of intriguing guitar players Trevor really stands out. His music is both soothing and challenging…” – Graham Nash – Rock and Roll Hall of Famer and well known member of the group Crosby, Stills, and Nash.

“…Creative imagination resides, as well as flourishes within certain artists, and it certainly does so in Trevor Gordon Hall. Ingenuity is something that always causes surprise, and this gentleman’s abilities are totally exceptional…” – Pat Martino – Legendary Jazz Guitarist