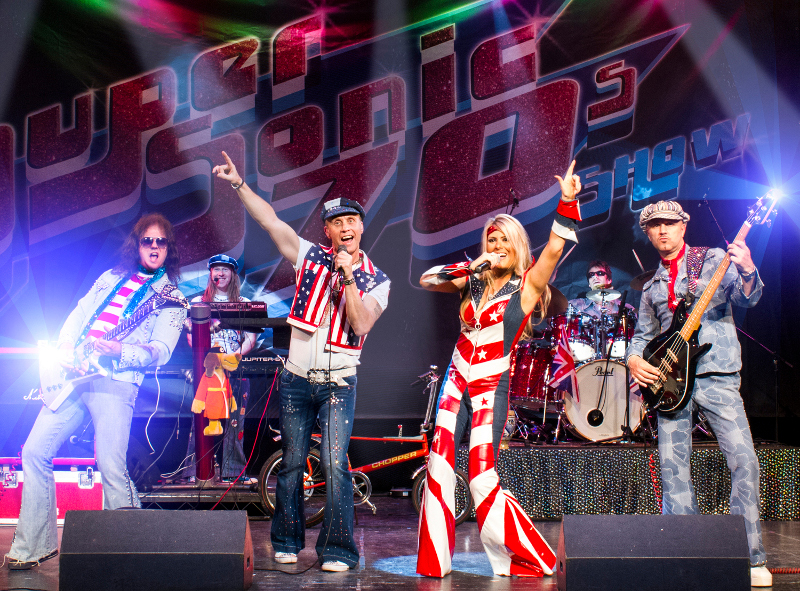 ‘The Supersonic 70s’ are a 6 piece ‘100% live’ band, with both male & female lead vocals. Featuring the incredible ‘Cat suited wondergirl’ Janey Bombshell, one of the finest female singers in the UK. Janey adds some real ‘Agnetha glamour’ alongside co-lead vocalist Mark Keen, the ‘velvet voiced’ singing sensation with the moves to match! The top flight band of musicians alongside have a wealth of experience worldwide & include guitarist/vocalist Greg Hart, Bassist Gary Williams, drummer Stevie Weaver, & the wizardry of keyboardist/Vocoder Andy Stewart, who is the grandson of the late great Arthur Askey!

Since 2010 the show has already been a hit at some of the most prestigious of venues, and they have literally whipped up a ‘Seventies sea of nostalgia’ to ecstatic fans wherever they play. Where the women sing along to every word, and the men ‘air guitar’ at will, it really is one huge 70s party by the end and everyone is up and dancing in the aisles- Yes it is that kind of show!

The show has been described by many venues as the ‘finest 70s show in years’, with Janey & Mark’s extraordinary vocals in particular being described as ‘West End quality’.