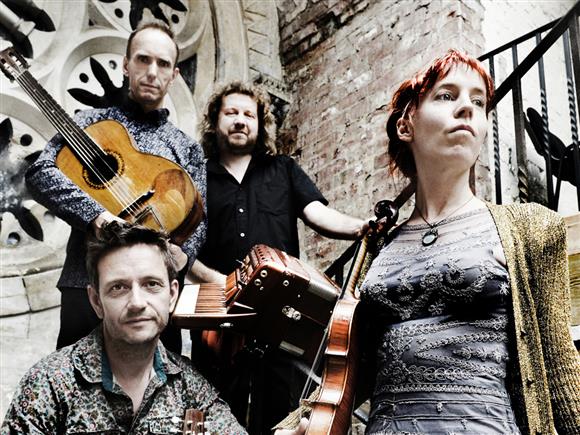 Following the release of their third album Lightbox on Peter Gabriel’s Real World label and their triumphant, tent-busting WOMAD performance, Spiro have leapt into the limelight, scooping both fRoots and Songlines magazines’ Album of the Year 2009.

Their latest release, Kaleidophonica takes their music further towards systems music. Imaginative, inventive and highly disciplined, Spiro transform the traditional music of the British Isles into something entirely their own. A line-up of violin, mandolin, accordion and guitar suggests folk, but the evolving rhythms, intricate arrangements and high-octane delivery take Spiro to the borders of territories explored by contemporary minimalist composers such as Steve Reich or Michael Nyman. Spiro deliver a soaring, potent and emotionally charged musical experience like no other.

Support act Senegalese Kora player Kadialy Kouyate draws on his West African heritage and its traditional story oriented songs as well as creating his own works.

Please note, ticket prices do not include dinner.
Doors 6.30pm for diners,7pm for non-diners