Polly and the Billets Doux 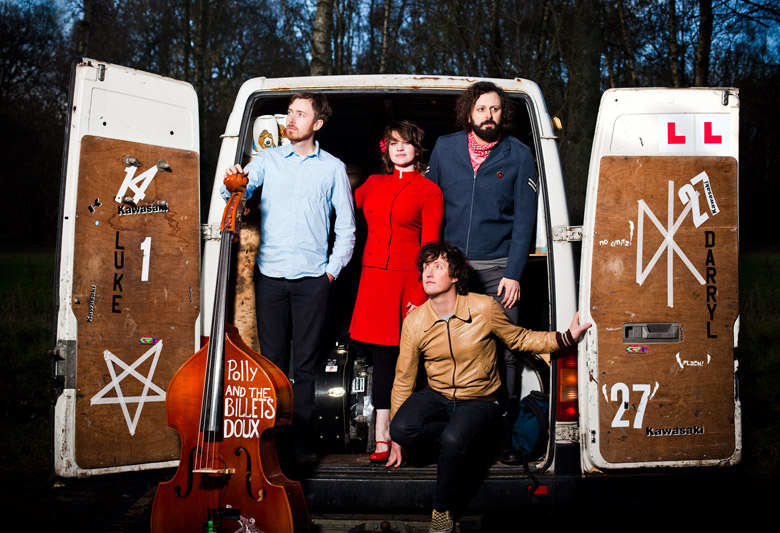 “a harmonious blend of folk, soul, country and gospel” The Sunday Times

“an eclectic and inspired musical blend” The Guardian

Polly and the Billets Doux are something brilliantly different.

Known for their flawless and energy-filled live performances, the genre-defying quartet Polly and the Billets Doux boast a genius blend of Folk, Pop, Rock N’ Roll, Soul, Country, Blues and even Gospel. They have a solid reputation and extensive history of headline tours up and down the country; from Ullapool to Brighton, and almost everywhere in between.

Their debut album Fiction, Half-Truths and Downright Lies had them topping many ‘ones to watch’ lists back in 2010, and the buzz hasn’t stopped since. That same year, they reached number 21 on the BBC Radio 1 Indie Charts and were invited to do sessions with BBC 6 Music’s Cerys Matthews and BBC Radio 4’s Loose Ends.

Support slots with Stornoway, Fun Lovin’ Criminals and Ellen and the Escapades have seen the band bring their music to increasingly wider audiences across the country whilst remaining festival favourites at many UK festivals including Glastonbury, Loopallu, The Big Chill, Secret Garden Party, Larmer Tree and Cambridge Folk Festival.

Between 2010 and 2012, Polly and the Billets Doux have embarked on eight headline tours of the UK and three busy festival seasons, stopping just long enough to write, record and release their latest Hold Fast EP in summer 2012, which gained great reviews from BBC 6 Music and much of the blogosphere including Folk Radio UK, For Folk’s Sake, The Line of Best Fit and The Blue Walrus. This latest collection of material perfectly demonstrates Polly’s beautiful gospel-inspired voice and the band’s truly original sound.

2014 sees Polly and the Billets Doux touring their eagerly awaited second album, touring the country extensively and firmly maintaining their reputation as one of the hottest festival tickets of recent times.

It’s going to be a big year for this vibrant, exciting and hugely promising band.

“From hot rocking thrills, to jazzy splendour to country darkness, the musical brief of Polly and the Billets Doux seems to be, if it sounds and feels good, go for it!” The Daily Mirror