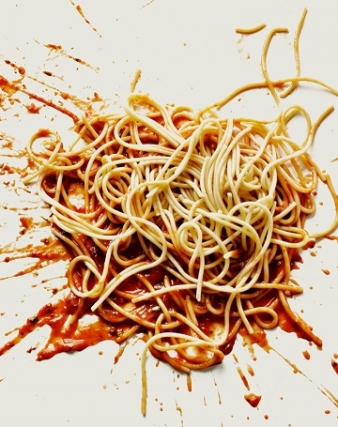 Marius von Mayenburg is a brilliant satirist whose work skewers pretentiousness and hypocrisy. His hilarious and outrageous pop at the selfrighteous political correctness of the middle classes is one of the funniest plays written in Europe in the last decade.

Michael and Ulrike are on the brink. Michael is a doctor, with ambitions of heroic grandeur; Ulrike, his wife, is assistant to the infamous Serge Haulupa, a bizarre conceptual artist; Vincent, their teenage son is hitting puberty with a vengeance – and a video camera; Jessica Schmitt is the new cleaner thrust in to clean up their mess.

Utter pandemonium ensues when Serge invites himself to Michael and Ulrike’s house to make art over dinner. The food fight is just the start of it…

Marius von Mayenburg is a trail-blazer for contemporary European theatre. In 2007 his play The Ugly One opened at the Royal Court to huge acclaim.

Olivier Award nominated Matthew Dunster is an Associate Director at Shakespeare’s Globe. His productions include Martin McDonagh’s 2015 hit Hangmen which transferred from the Royal Court to the West End to huge critical acclaim.