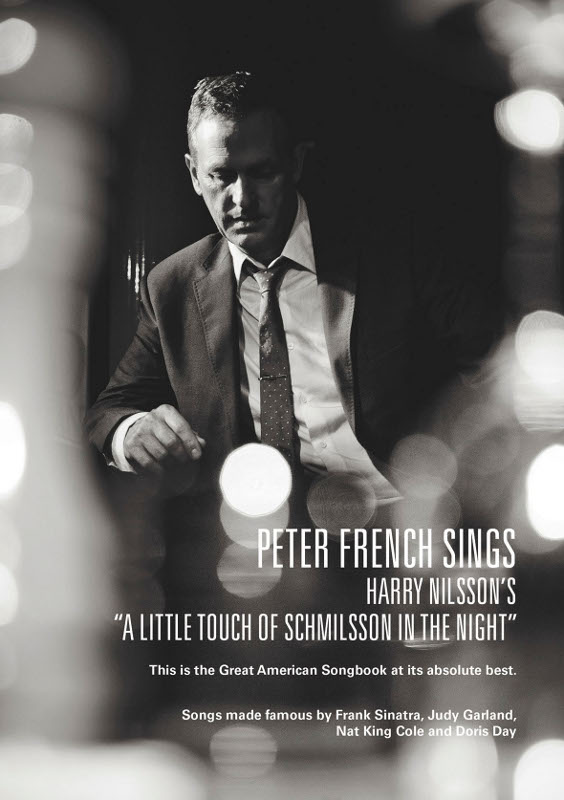 ACT ONE:  MOONLIGHT AND LOVE SONGS

Peter will be singing his personal choice of songs from the great American songbook with the theme of the MOON and the NIGHT, all put together to form the narrative of a relationship.

Songs include, BLUE MOON, DREAM A LITTLE DREAM OF ME, THE WAY YOU LOOK TONIGHT, BY THE LIGHT OF THE SILVERY MOON and many more.

Peter will be recreating this iconic 1973 Harry Nilsson album of classic 20th Century standards, beautifully arranged and re-imagined by Gordon Jenkins, Frank Sinatra’s own conductor and arranger, and transcribed for piano by Peter’s Musical Director, Michael Haslam. This is the great American songbook at its absolute best and as you have never heard it before. Sinatra described it as “MAGIC”.

IT HAD TO BE YOU, MAKIN WHOOPEE, YOU MADE ME LOVE YOU, OVER THE RAINBOW, AS TIME GOES BY and many more.

Peter gave the World Premiere of this highly acclaimed show in London in June 2013, and has just released the CD of the show. It was featured on Gaby Roslin’s BBC Radio show in June 2014. Since the release of the album, Peter has played London again and toured Scotland.

He is here for one night only. Do not miss this wonderful intimate show !!

He has performed alongside Elaine Paige, Jonathan Pryce, Jeremy Irons and Lord Andrew Lloyd Webber in a special concert he produced at “Her Majesty’s Theatre”, London.

Peter was trained by the World famous singing teacher, Ian Adam, who taught amongst others, Michael Crawford, Sarah Brightman and Elaine Paige.