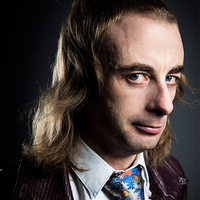 Heralded by critics, Paul’s previous tours have been showered with 5 star reviews and nominations, credited as “masterful” (Scotsman) and “ingenious” (The Australian Herald Sun).

His subversive, insightful absurdity constantly challenges and delights his faithful connoisseurs, leaving “your sides sore and your face wet with tears” (Edinburgh Evening News). His most recent TV credits include BBC One’s Would I Lie To You, BBC Two’s Never Mind The Buzzcocks, Channel 4’s 8 Out Of 10 Cats and Comedy Central’s The Alternative Comedy Experience.

Don’t miss your chance to see “a cult classic, a relic from the past, a rare exotic bird, he’s special” (The Daily Express).

“It’s baffling to me that Paul is not a household name in this country. His routines are like jazz clusters, loose hammocks, choked to the brim with jokes and ideas” (Noel Fielding)