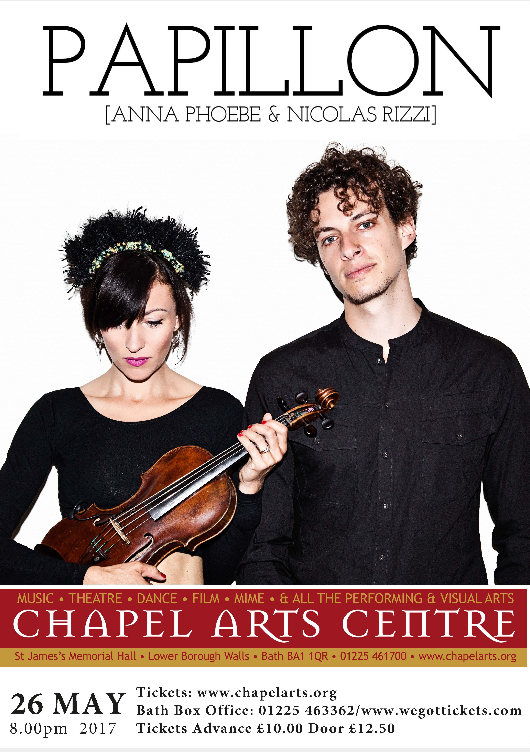 “See Anna Phoebe as she prowls the stage and you can’t take your eyes off her” – Simon Broughton, Evening Standard.

Papillon is the new project by Anna Phoebe and Nicolas Rizzi. It combines raw Eastern inspired violin and guitar melodies set within cinematic soundscapes. Anna Phoebe has performed throughout the world as a featured soloist for various artists and is now carving a career with her own projects.

Together with Nicolas Rizzi and her band, Anna released her EP ‘Embrace’ in 2013 followed by the album ‘Between the Shadow and the Soul’ in 2014. As ‘Papillon,’ Anna and Nicolas will perform their new material in a series of live concerts in 2017, to be followed by the release of their debut album .

Previous live performances include main support for Bob Dylan at the Rock Legends Festival in Poland, the Songlines Encounters Festival at Kings Place in London, and a tour of UK cathedrals including Winchester Cathedral and Liverpool Anglican.

Violinist and composer Anna Phoebe has been thrilling audiences all over the world with her stunning live performances. Dazzling and charismatic, she’s played major arenas all over the United States, London venues including the Royal Albert Hall and the Royal Festival Hall, and festivals across the UK and across the world such as Glastonbury, Fuji Rock and Sonar Festival. Anna has toured with artists and bands including Jon Lord, Jethro Tull, Roxy Music, Oi Va Voi, and the Trans Siberian Orchestra, as well as a solo artist with her own band.