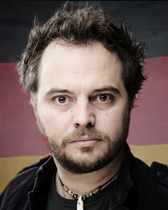 German comedian Paco Erhard is German, but he has other problems too. Like answering the question “How to be happy in a world we know is essentially f*cked?”. Or trying to make sense of his 5 years observing you Brits in your natural habitat. Or the fact that after travelling the globe for 14 years and selling out at comedy festivals worldwide for 6, he has moved back to Berlin and is coming to realise: yes, he is German, but he’s pretty sh*t at it.

Now he bares all in his edgiest, most personal show yet. You will laugh. If you want. Zis is not an order.

A high-octane mix of social satire, playful madness, and cross-cultural mischief that the media calls “intelligent, political, smutty and genius” (Adelaide Advertiser, 2015). Paco draws on his meandering life around the world, comparisons between the cultures he has lived in, mischievous thoughts on society, politics, media, religion and other bullshit, as well as observational comedy and just plain silliness.

Considered “one of the best cultural comedians in the world” (Rip It Up, 2015), Paco was nominated for the Fringe World Best Comedy Award 2013, has garnered multiple 5-star reviews, clocked up numerous worldwide TV and radio credits while performing around the globe in English, German, and Spanish, and now has a residency at Berlin’s famous Bar Jeder Vernunft theatre.

“The well-travelled, politically incorrect German comedian is on top form – a German combination of Jim Jefferies and Bill Hicks… observational comedy and satire at its finest” ***** Three Weeks