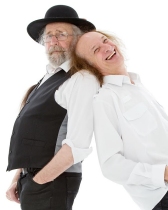 This may be the last Otway and Barrett tour – according to Willy. Otway remains unconvinced.

The first place Otway and Barrett did not work together was their first gig – John was heckled off stage during his solo number and both Willy and the audience decided that it would be better if they did not do the rest of the show as a duo.

After an appearance on The Old Grey Whistle Test – during which John landed on his testicles whilst leaping astride Willy’s amplifier – an amused punk audience bought enough copies of the single “Really Free” to give them their first Hit.

When times got tough they did re-unite for short periods of time, but any sustained partnership was usually curtailed by unreasonable behaviour by one of the parties. Barrett writing a song called “Give It Headbutts” which required him to bang John’s head against the microphone in time to the music and Otway recording a solo album called “All Balls and no Willy” are typical examples of this.

In the past few years Otway and Barrett have reunited for a few short tours, if only to prove that nothing much has changed.

Both John Otway and Wild Willy Barrett remain enigmas to the vast majority of the British public, but for those who know they are amongst the top ten of favourite artists to see live. The show is a wonderful eclectic mix of bizarre humour, superb visual effects, fine guitar playing and the best use of a Theremin anywhere.