The Noise Next Door’s Comedy Lock In 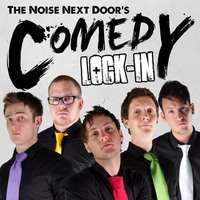 Join The Noise Next Door and their special guests for a 21st century mash-up of stand-up, panel shows, and after-hours banter. With this brand new breed of comedy club not only do you get a hefty dose of The Noise Next Door’s cutting edge off-the-cuff madness and two of the country’s leading stand-ups but you’ll also see some truly unique one-off comedy curiosities.

Chris Martin is one of the newest and most exciting acts to hit the comedy circuit. His wholly original social commentary, observations and anecdotes are his trade mark. A former winner of The Comedy Store’s ‘King Gong’, Chris has toured the UK with Russell Kane and Pete Firman.

Roger Monkhouse‘s trademark stage-prowling style and curious, inimitable manner have established him as one of the hottest names on the comedy circuit.  A highly original and quirky performer, Roger is also one of the regular writers on Channel 4’s hugely popular comedy panel show ‘8 Out of 10 Cats’.

Indulge yourself in an evening of shameless entertainment.

“Hilarious… A superior kind of chaos”
The Daily Telegraph