The Noise Next Door: The Noise Are Back In Town 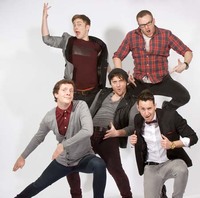 The Noise Next Door: The Noise Are Back In Town

The U.K’s most exhilarating comedy act embark on their second national tour. The Noise Next Door will be delivering explosive doses of their trademark off-the-cuff comedy directly into the funny bones of the nation. Six time sell-out veterans of the Edinburgh Fringe Festival and one of the country’s most sought after comedy club headliners, The Noise Next Door leave audiences everywhere in awe of their lightning quick wit and totally original comedic talents. Side-splitting scenes! Mind-blowing songs! Finely tuned anarchy! This is a night of comedy that you simply can’t miss…

“Hilarious… A superior kind of chaos”

“This is 21st century comedy at its very finest and funniest”