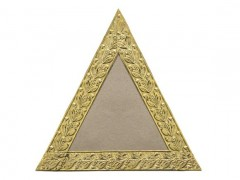 In 1882 Mary Anne Barbara Holburne bequeathed her brother’s collection of over 4000 objects, pictures and books to the people of Bath, intended to form ‘the nucleus of a Museum of Art for the city of Bath.’ She never married, and lived with her brother along with her two unmarried sisters in Cavendish Crescent, Bath.

When artist Holly Davey was invited to undertake a period of research within the museum’s collections, she developed a fascination in the three Holburne sisters, especially Mary Ann Barbara (1802-1882), the last of the Holburne family line.

Working with objects from the collection and research surrounding the period, Davey’s installation atThe Holburne Museum blurs the boundaries between fact and fiction, encouraging the audience to reflect on and reanimate the hidden and largely forgotten existence of these women’s lives.

The Nameless Grace is a co-commission between ICIA and The Holburne Museum.
The second part of the exhibition will be shown as part of the opening programme in the Centre for the Arts, University of Bath in February 2015.

Holly Davey is an artist working with ideas surrounding memory, object and archive. Since graduating Goldsmiths College, London in 1998, she has exhibited widely in solo and group exhibitions in the UK and internationally. In 2013 she was awarded a large commission at the National Museum Wales that was supported by The Colwinston Charitable Trust. In 2010 she received a Creative Wales Award. She lives and works in Cardiff.