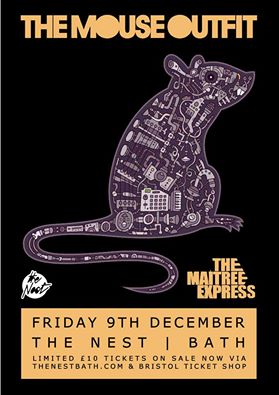 The Mouse Outfit was founded in 2008 by Paul Hooley (Chini) + James Defty after they met at an audition in Manchester. They formed a band and began producing music with a number of local musicians + vocalists. Defty started a jam night, in order to meet local talent, called ‘In the Loop’ (where rappers would freestyle to live breaks from The Mouse Outfit band) Here, they began crafting a live show with hip hop and funk breaks combined with original grooves. The band started gigging locally and around the UK with various changes in line-up. Chini was a teacher at a music college in Manchester and noticed a talented student drummer Adisa Allen (Deese) who joined the band in 2010.

After uploading a track to BBC Introducing they were asked to perform a session at BBC Maida Vale studios for the Mark Lamarr show on BBC Radio 6. Another of Chini’s students, Ian Garland (Pitch) joined in 2011 as a beatmaker. Pitch had been working with Dr Syntax and he soon started working with the band as well. ‘In The Loop’ regular Sparkz was asked to feature on a track and after recording several singles he also became a regular member of the live show.

In 2012, Defty + Chini also began producing music videos after working with a local filmmaker Tom Doran. Defty took a greater interest in video and began filming + editing a stream of music videos. Chini continued producing music with local rappers + musicians and recording them in his studio over his own beats and beats from Pitch + the result was ‘Escape Music’ their debut album released in May 2013. The Mouse Outfit has remained independent and Defty and Chini continue to manage all aspects of the band including tours, merchandise, social media and promotion.