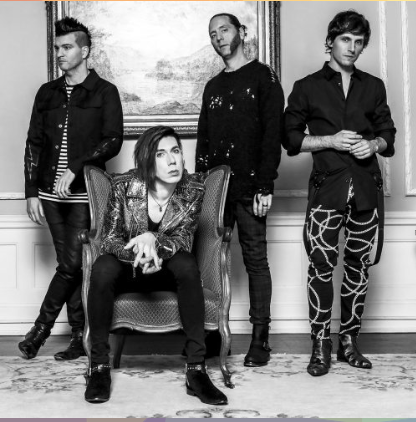 Time to dust off the shiny pants, the Trench is back!

“Europe! The Suspending Gravity Tour is coming to you! We’re unbelievably excited to be back this November. Grab your best masquerade mask, a box of croissants for Matt, and come scream your facehole off with us. We can’t wait to see you!” said lead guitarist Matt Webb.

The 13-date tour will feature the powerhouse Vancouver quartet’s signature high-energy performance, while showcasing material from their new studio album Phantoms in addition to hits from their previous double platinum and gold-selling albums. Phantoms was released digitally this past March 2019.

The rabid Marianas Trench faithful got a preview of Phantoms this past autumn with the bouncy first single “I Knew You When.” The song’s high energy is indicative of the album as a whole, although lyrically it reflects Phantoms’ overall theme of coping with memories of past relationships.

Lead singer Josh Ramsay explains, “I wanted to set an album from the perspective of someone descending into madness as he inhabits a house haunted by the ghost of his former love. I looked to Edgar Allan Poe for inspiration. Strangely, the date he was rushed to the hospital preceding his death was October 3rd, the same day our first album was released, and the same date I was once to be married. Even more strangely, we finished this album on January 19th, his birthday. I’m not one for superstition, but that does feel oddly serendipitous.”

Marianas Trench have consistently raised the musical bar both in the studio and via their explosive live shows. They have built their name on relentless touring across North America and globally, headlining tours in the USA, Canada, Europe, Australia, and New Zealand.