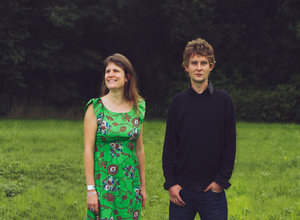 Lazibyrd have shown that they have all the necessary ingredients to take it to the next level and are definitely one to watch  – FRUK.
Award winning Lazibyrd, South West Music Awards, best folk act of 2013, are Sharon Martin, vocals, violin and ukelele and Tom Chapman guitar and vocals. They play energetic, passionate, original folk with clever lyrics and beautiful music. Their debut album, Under the Sky, has been critically acclaimed and received extensive radio airplay including BBC Introducing, BBC 6 and BBC Bristol. Bob Harris has described it as “a lovely album” and they recently recorded a session for him and the WBBC.
They were included on the FATEA showcase sessions in 2013 and were shortlisted for a Dave Swarbrick EP in 2014 featuring songs by emerging artists and they were invited to support Dave Swarbrick as part his tour in May 2014 at The Colston Hall. They have engaged audiences across the South and in Ireland with their heartfelt performances and excellent musicianship and have performed at many festivals and prestigious venues.
“As well as their beautiful harmonies and captivating musicianship, lyrically they offer a refreshingly frank view of modern life which, wrapped in a joyful melody and their own sense of enjoyment, makes for music that is sure to resonate with any listener.”

Thank folk for that!