A bent London cop who works underground gets involved with some seriously dangerous people in this stunning new drama from young British director Gerard Johnson, who will be attending the screening.

Michael Logan (Peter Ferdinando) is a policeman, but not your average British bobby on the beat – he’s in the drugs business and is quite happy to casually commit crime in his spare time. However – with shades of The Long Good Friday – there are shadows on the horizon; when Logan’s Turkish drug deal goes south, some very nasty villains, who make Attila the Hun look like Rupert Bear, show up in town. There’s human trafficking going on alongside the drugs, not to mention an internal affairs investigation.

‘Hyena’ is startling, claustrophobic and penetrating in its analysis of the blurred lines involved in doing good. And in once again showcasing the talents of Peter Ferdinando and Gerard Johnson it announces the arrival of a British acting and directing partnership to reckon with. It’s the most powerful homegrown crime flick since ‘Sexy Beast’. Time Out 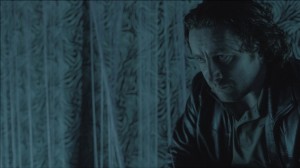