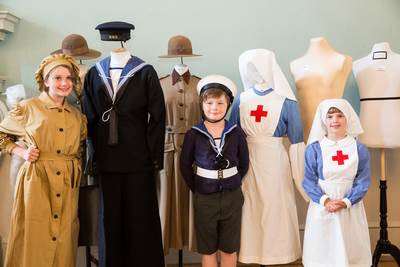 “The war is usually seen through military eyes.  However, it could not have been won without the efforts of millions of women. They proved what they could do  – what took a great deal longer was to convince everyone that they should do it.”

‘Fighting on the Home Front:  The Legacy of Women in World War One’  by  Kate  Adie, (Hodder &  Stoughton)

World War I changed women’s life forever; in terms of status, class, position and what was acceptable for a woman to wear. Fashion changed with the innovation of women being required to do men’s work. The corset disappeared and trousers became a norm.

This exhibition traces women’s lives and roles during this savage conflict; their work on the home front and how that influenced the dress that they adopted.

Featuring examples of uniforms and civilian dress, memorabilia and propaganda, and numerous costumes from the series Downton Abbey.

There are opportunities for children to dress up in the exhibition space too.