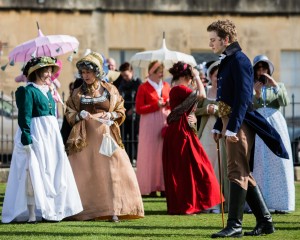 Meeting point:
The Octagon Room in the Assembly Rooms
Meeting time: From 10am until 11am

Buy your ticket, put on your costume and join 600 people dressed in Regency style, for this world famous, spectacular, official opening to the Festival. Departing from the Assembly Rooms, accompanied by red coats and led by our own town crier, stroll through this beautiful city to the finish at Parade Gardens, near Bath Abbey.

Plus take part in our … World Record attempt

In 2009 the Jane Austen Festival achieved the Guinness World Record for ‘The largest gathering of people dressed in Regency costumes – at 409′.

Five years later we believe we can beat this record and raise money for charity. £1 from every ticket sold will be donated to the local branch of the Multiple Sclerosis Society.

Toilets and refreshments are available at the Assembly rooms where the count will take place. There are strict rules on what is allowed in the way of costume, see link below for details.

It is not necessary to purchase a ticket to watch the parade through the streets.

The Octagon Room in the Assembly Rooms
Bath, + Google Map