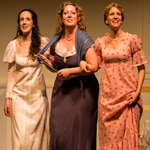 An Improvised Novel Jane Austen famously wrote six novels – or did she? Undoubtedly one of the most talked-about shows on the improvised comedy circuit. This hour-long comedy play is spun in the inimitable style of Jane Austen and based entirely on audience suggestions. A seasoned cast presents an eloquent, irreverent, 100% improvised take on Austen’s works performed in period costume with live cello accompaniment. Back by popular demand a suitably hilarious and superb ending to the Festiv