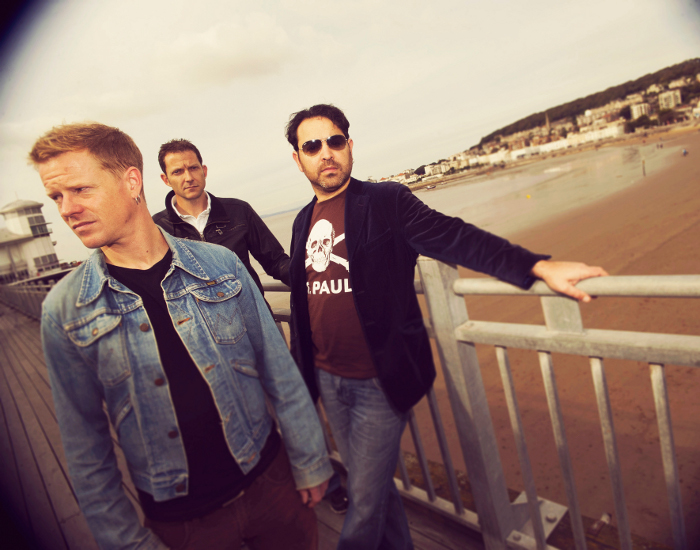 ‘A blend of energy and musicianship that establishes this trio as one of Britain’s outstanding folk bands…[a] distinctive blend of subtlety and attack.’ **** The Guardian

‘The concept? To rescue contemporary folk from the curse of feyness… Bloke-folk!… Fans of Led Zep III should take a thoughtful interest.’ **** Independent On Sunday

Nominated in the 2009 BBC Radio 2 Folk Awards, the Faustus triumvirate are three of the leading lights of their generation: Saul Rose (Waterson:Carthy, Whapweazel), Benji Kirkpatrick (Seth Lakeman Band, Bellowhead) and Paul Sartin (Bellowhead, Belshazzar’s Feast). They have a plethora of experience between them, brought together here in a virtuosic display of musicianship and testosterone. Rooted deeply in the English tradition, in 2007 they received a 75th Anniversary Award from the English Folk Dance and Song Society.
Benji: Scion of a noted folk dynasty, Benji Kirkpatrick is a key member of folk big band and BBC Award winners Bellowhead. Benji featured with the Seth Lakeman Band who shot to fame when ‘Kitty Jay’, featuring Benji, was nominated for the Mercury Music Prize in 2005. Benji has also performed with numerous other artists including Oysterband, John Jones and Maddy Prior (Steeleye Span), and has also found time to release three solo albums.

Saul: Saul Rose was a long time member of Waterson:Carthy, winning two BBC Radio 2 Folk Awards with ‘Broken Ground’ and forming a duo with Eliza Carthy. The double album ‘Red Rice’, of which Saul was an integral part of the ‘Rice’ half, was nominated for the Mercury Music Prize in 1998. More recently Saul has joined Whapweasel, played in Ruth Notman’s band, and re-launched his duo with hammered dulcimer player with Maclaine Colston. He has played on numerous albums as a guest, including Jackie Oates’ album ‘Hyperboreans’, Norma Waterson and Eliza Carthy’s album ‘The Gift’ and the soundtrack for the film ‘Morris- A Life With Bells On’. He was nominated for the Musician of The Year award in the 2010 BBC Folk Awards and in 2011 took the part of Songman in the West End play War Horse.

Paul: Paul Sartin is also a member of Bellowhead, as well as BBC Folk Award-nominated duo Belshazzar’s Feast. He is Director of the Andover Museum Loft Singers, consultant for the charity Live Music Now and is a composer of note with recent works including ‘The Hartlepool Monkey’ for Streetwise Opera, ‘Anthony and Cleopatra’ for the Central School of Speech and Drama, and ‘Changing Landscapes’ for Broadstairs Folk Week.
Faustus came together in 2006 as an evolution of the award winning band Dr. Faustus. They made an eponymous debut album in 2008, produced by Stu Hanna and released by Navigator Records, which saw them nominated as the Best Group in the 2009 BBC Radio 2 Folk Awards. Subsequent touring saw them headlining at festivals, as well as playing sell-out concerts at arts centres and clubs.

‘Dynamically fascinating to watch, entertaining and intriguing. Their ability to switch from song to tune, from instrument to voice, from traditional tune to modern arrangements made seeing them again a necessity’ Folk and Roots

After a two year break, Faustus returned to the live circuit for festivals in summer 2012. In March 2013 they released a new album ‘Broken Down Gentlemen’ on Navigator Records and undertook two major tour in 2013 and will continue touring in 2014.