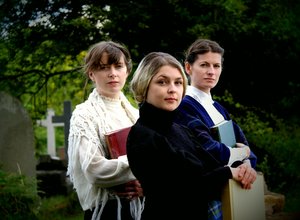 “Whatever our souls are made of, his and mine are the same”: Cathy, Wuthering Heights

Three talented sisters… Three captivating heroines… Three new adaptations!
Whether you are a hard-core Brontë fan or if you’ve never had the pleasure, these fresh new interpretations will invigorate, inspire and warm the heart of young and old.
Live Wire Theatre together with Butterfly Psyche Theatre have created three brilliant new stage adaptations of the Brontë sisters’ classic novels: Emily Brontë’s Wuthering Heights, Charlotte Brontë’s Jane Eyre and Anne Brontë’s The Tenant of Wildfell Hall.
Adapted by critically acclaimed writers Dougie Blaxland (Biggles, A Christmas Carol, That Moment) and Alison Farina (Fertility Objects, The Persistence of Memory, The Blue Bird) these new productions show very clearly how progressive and brave the Brontë sisters really were. Their passionate, iconic and timeless stories (written nearly 200 years ago) touch upon issues that are still very much relevant today.
Performed in Rep, with only one and two actors, there’s a chance to mix-and-match an old favourite along with a new acquaintance as well as the chance to see all three (with breaks, obviously!) at Omnibus
Performances on the Saturdays*.
Reviews of Livewire’s Jane Eyre:
“… as fine a stage adaptation of a novel as you are likely to see  – a five star show in every sense.” – Bath Chronicle 5-Stars (*****)
“…gave my soul a little hug…” – Intermission 5-Stars (*****)
“…first-class performance in what is undoubtedly a first-class production.” – British Theatre Guide 5-Stars (*****)
*Special discounts available for schools groups and for the triple-feature Omnibus Performances.
There will be post-show discussions on Friday the 19th of September and Friday the 26th of September.
Performance Schedule:
+ Google Calendar+ Add to iCalendar