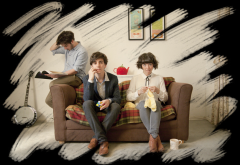 Broken Boat are a band characterised by their playful approach to music. Jumping from intimate folk ballads reminiscent of Bright eyes and The Decemberists through country, blues and pop they have arrived at an infectious sound that whilst unique, you somehow feel you grew up listening to.

Songwriter Daniel Bahrami and multi-instrumentalists Brendan Kearney and Jess Hart, collaborate with a circle of other musicians to create a captivating, colourful live show. Bringing together an unusual mix of strings, horns, accordions, keyboards and percussion, Broken Boat are gaining a firm reputation as much for Daniel’s deep, honest lyrics as for their intricate, textured compositions and warm vocal harmonies. Broken Boat started its journey as an acoustic folk duo, gathering a loyal fanbase for their simple, heartfelt songs. Capturing the attention of numerous independent record labels they released their debut EP ‘Peace and Quiet’ in 2012, which was featured several times by Bob Harris on BBC Radio 2 and awarded track of the week by BBC Introducing.