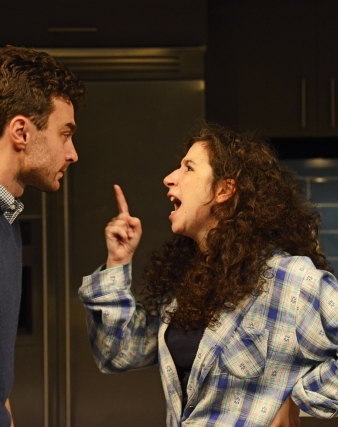 Prepare for a night like no other with the UK Premiere production of this uproarious hit, hailed by the New York Times as ‘the best comedy of the season’.

A beloved grandfather has died, and a treasured family heirloom with religious significance is up for grabs. But who is most deserving of it? Bossy, overbearing, fanatically religious Daphna? Her wealthy cousin Liam, who’s just returned from skiing with his non-Jewish girlfriend Melody? Or Jonah, his brother, who would prefer not to get involved in the fight?

A cramped Manhattan apartment becomes the setting for a viciously hilarious quarrel about family, faith and legacy as the contenders set at each others’ throats on the night after the funeral.

Jenna Augen starred in the acclaimed production of Chicken Soup With Barley at the Royal Court Theatre and played the lead in the short film Josephine and the Roach which won awards across the USA including at the Sundance/Slamdance Film Festival.

Michael Longhurst directed Jake Gyllenhaal in his American stage debut in Nick Payne’s If There Is I Haven’t Found It Yet. His Royal Court production of Payne’s Constellations starred Sally Hawkins and Rafe Spall, transferred to the West End, winning the Evening Standard Award for Best Play 2012 and receiving four Olivier Award nominations. His production of Adam Brace’s Stovepipe featured in the Sunday Times ‘Best Theatre of the Decade’ list.