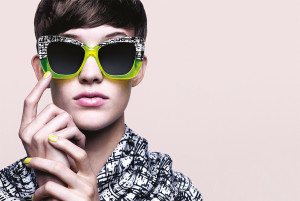 In conversation with Hywel Davies, lecturer from St Martins

Anna Sui’s collections take you on a creative journey that is unparalleled in the world of fashion. Mixing vintage styles with her current cultural obsessions, she effortlessly makes hip and exuberant original clothes. Whether Anna’s inspiration is Victorian cowboys, Warhol superstars or Finnish textile prints, her depth of cultural knowledge is always apparent. “When I’m interested in something, I want to know everything about it, ” she says, “I need to know what’ s behind it all. I really enjoy that process. ” Anna’ s constant search for new ideas and challenges keeps her ahead of her times. She’s a true trendsetter to whom stylists and editors look for direction. The boundless energy and creative ingenuity of her runway presentations always make her shows a high point of New York Fashion Week.

The career of Anna Sui is a classic American success story. “You have to focus on your dreams, even if they go beyond common sense. How could this young girl from the suburbs of Detroit become a success in New York? It was always that dream,” she says. Today Anna Sui has over 50 boutiques in eight countries and her collection is sold in 300 stores in over 30 countries. Anna still has the same love of fashion that she did when she was a little girl. At age four, she decided that she would become a designer and started to make her own clothes. She mixed a very serious approach to learning her craft with eccentric ideas, such as vowing to not to wear the same outfit twice in one year. “I was completely obsessed,” she says, “I don’t know how my parents put up with me.” Before the end of her senior high school year, she was accepted to Parsons School of Design in New York. After two years at Parsons, Anna styled with friend Steven Meisel and designed for several sportswear companies before launching her first collection in 1981.

Anna Sui’s business continued to grow throughout the 1980s, and in 1991 she premiered her first runway show. The following year she opened her first flagship store on Greene Street in Soho. The boutique’s vibrant mix of black Victorian furniture, purple walls, papier mache dollyheads and rock n’ roll posters closely reflects Anna Sui’s personal decorating style and has been the model for all of her shops. The late 1990s was a time of significant growth for Anna Sui; she embarked upon a hugely successful expansion in the Far East, where she quickly established a huge cult following. She also launched cosmetics, fragrance, shoe and accessory licenses. Her devotion to detail is apparent in every one of her products, which are all intimately connected to herworld. Hericonic make up packaging and fragrance bottle design have even become collectors’ items.

Anna Sui is known for her commitment to the things that move her. Her devotion to rock and roll makes her clothes perfect for a rock and roll superstar, and her runway soundtrack is one of the most anticipated each season. Her love for shopping has made her an authority on the best shopping in every city, and her passion for interior design created a visually stunning NYC apartment. Following her own inspiration, Anna Sui continues to inspire. She is living her dream.