Anna Morris – It’s Got To Be Perfect 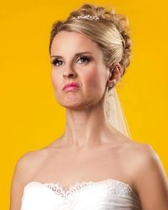 You are invited to attend the wedding rehearsal of viral YouTube star (Georgina’s Wedding Blogs) Georgina Francis (dubbed ‘Britain’s Worst Bride’ in the press) and her long suffering fiancé Simon, a Conservative Politician.

Georgina is determined to have THE perfect wedding when she ties the knot this year, so what better way to make sure everything goes smoothly than to rehearse as many times as possible, all over the UK, using the audience as fill-in guests?! Be warned – nothing will get in the way of her perfect day. Don’t. Be. Late…

“The best wedding I’ve ever been to” **** Broadway Baby

“Terrific writing and an exceptional performance” **** The Skinny