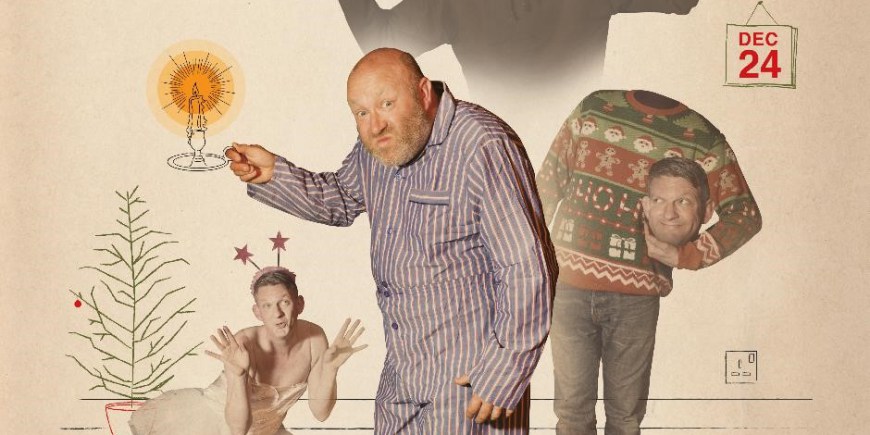 The Goose is panicking…

And Living Spit are back –

To start your Christmas with a zing!

Hard-hearted Ebenezer Scrooge hates the season of goodwill. Until a visit from three Phantoms one memorable Christmas Eve makes him rethink his miserly ways and turn his wicked life upside down… blah blah blah.

We all know the story. We’ve all seen the film(s). But who’s the best Scrooge of all time? Albert Finney? Alistair Sim? Patrick Stewart?

Well, just hold your horses there, Sir/Madam! Because you’ve yet to witness the actor Howard Coggins’s unique take on the eponymous anti-hero of Dickens’ festive masterpiece.

Like a coiled spring he waits in the wings, ready to take up the mantle and give the performance of his career as the mean miserabilist, Ebenezer Scrooge. And he’s brought Stu Mcloughlin along for the ride to dress up, sing, dance and generally act like a complete idiot whilst playing ALL the other parts.

With silly songs, pitiful puppetry and more Dickensian daftness than you can shake a selection box at – a feast of festive foolery!

★★★★ “A glorious celebration of silliness, fully appreciated by a packed home crowd.” The Stage on Elizabeth I: Virgin on the Ridiculous

‘Cleverly written, beautifully acted, and, dare I say it, educational. Howard and Stu are a double act to keep a beady eye on…both actors perform with bounds of enthusiasm, wit and technical skill; their versatility and range is outstanding.’ Kneehigh’s Emma Rice on The Six Wives of Henry VIII

“Both actors perform with bounds of enthusiasm, wit and skill…outstanding.” The Post on The Six Wives of Henry VIII