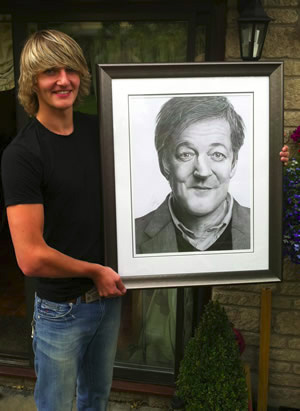 Conor is a student at Bath Art & design college. He is 18. He has just won the Marilyn Comparetto international portrait prize. Conor will be the guest judge in 2012.

Conor has also been on TV on ITV westcountry tonight with his art work. The link to the tv interview is on his website. Stephen Fry was thrilled with his portrait and tweeted it to over 3 million followers. Conor is a regular in the local newspapers.

He also trains as a discus thrower at Bath Sports village with an England Coach doing Discus. There is much more going on, watch this space, but his career as an independent artist seems to be taking off.

David Shepherd CBE has dedicated a page to Conor on his web site at Tigertime. Conor is helping David’s campaign to save Tigers by donating £5 of every Fragile Future limited edition of 300 prints to help Save the tiger from disappearing forever. Fragile Future Limited Edition Prints

Tripps in keynsham high street have 2 artist proofs available – only 3 copies were ever produced.