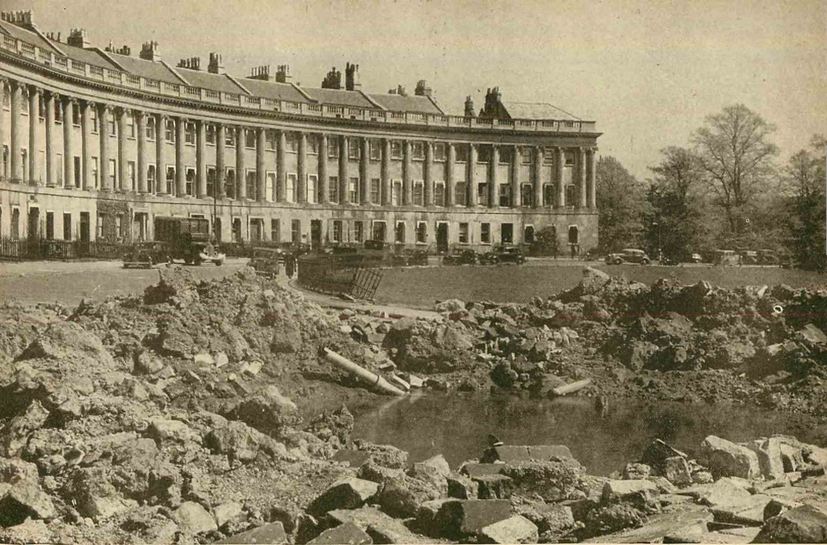 Although some of Bath’s manufacturers were engaged on wartime production, producing gun mountings, torpedo parts, aircraft propellers and other products for military use, German Intelligence had not identified Bath as a strategic target. Similarly, although the Admiralty had moved its entire warship design operation from London to Bath, the intelligence at the time thought that just a few high ranking staff officers had decamped to Bath and were staying in hotels. Thus Bath was officially “a lesser town without specific aiming points” and to maintain that fiction Bath was deliberately undefended, having neither a balloon barrage nor anti-aircraft guns. Hostile aircraft did fly over Bath, but usually on their way to other targets such as Bristol.

Nine times during the “Air Battle for England” bombs fell within Bath’s boundaries, but these were strays which were intended for targets elsewhere and became misdirected due to bad weather or poor navigation. Mostly they fell without casualties, but in March 1941, 6 people died when bombs fell on Twerton, and the following month, 11 were killed when Widcombe was the target.

But in April 1942, Bath itself was the target, in a reprisal for the RAF bombing of Lübeck. During two nights and the following morning at the end of April, many hundreds of high explosive bombs and countless incendiary devices were dropped. The official figures show that around 900 buildings were completely destroyed and around 12,500 buildings were damaged during these raids. Over 400 people were killed, many of them women and children. Yet contemporary Bath bears almost no sign of its recent history: it appears to be an elegant and intact Georgian city. Many of the buildings were repaired, or rebuilt to the original design. Like other cathedral cities that were bombed, Bath’s memorial to those who died can be found at the entrance to the Royal Victoria Park. This memorial was made possible by the fund raising efforts of the Bath Blitz Memorial Project – www.bathblitz.org