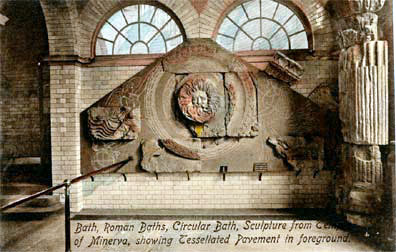 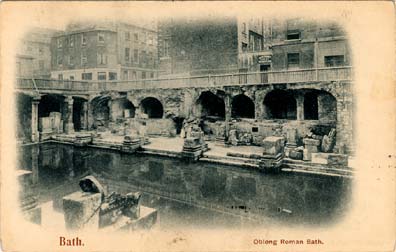 Although still mostly buried under magnificent Georgian streets, the Roman ruins in Bath are unsurpassed in Britain. About 2m below the present level of the city, the Romans started building their great baths and temple at the sacred spring soon after the Conquest, in the middle of the 1st Century AD. They named their city Aquae Sulis and soon transformed the Celtic druids grove into one of the major therapeutic centres of the West. The Romans revered the Spring just as the Celts had done; by the 3rd century its stunning temple and luxurious baths attracted pilgrims from throughout the Roman world.

The art and engineering of the remarkable baths at Minerva’s temple offer us a glimpse of Roman Britain at its most glorious. The complex housed no fewer than five healing hot baths by the time it was completed in the 4th century AD. An elaborate hypocaust heating system serviced a series of hot sweat rooms; swimming pools and cold rooms cooled the pilgrims down. At the centre, in its own hall and lined with 14 massive sheets of lead, was the Great Bath. Surrounded by the gods, whose statues emerged mysteriously from the swirling steam, the Great Bath must have seemed a wonder of the ancient world.

The ancient world marvelled at Minerva’s great temple in Bath. Shrouded in steam, pilgrims approached the mysterious sacred spring at the heart of the temple believing it to be the actual residing place of Sulis Minerva, whose healing cult had spread from Britain throughout the Empire. Not only was Minerva’s water renowned for its healing powers; by throwing their offerings into the spring, pilgrims believed that they could communicate directly with the Underworld. Almost 20,000 coins and several gold and silver artefacts have since been recovered. The visual and symbolic focus of the temple was the sacrificial altar. The great mass of stone stood nearly 2m high; its top was chiselled smooth and slightly dished to hols the animals that were slaughtered for augury.

Amongst the most remarkable and revealing artefacts recovered from the Roman Baths are the written dedications, vows and curses that centuries of pilgrims cast into the hot spring. As well as appealing to Sulis Minerva for health or wealth, the pilgrims inscribed curses on thin pewter sheets which were then usually rolled up and placed in the water. Typically each curse stated a lost love or piece of stolen property; numerous suspects ‘whether pagan or Christian’ were often listed with an appeal that the guilty should meet some foul end. Common are spells to counter others curses; writing backwards was thought to imbue the magic with extra potency.