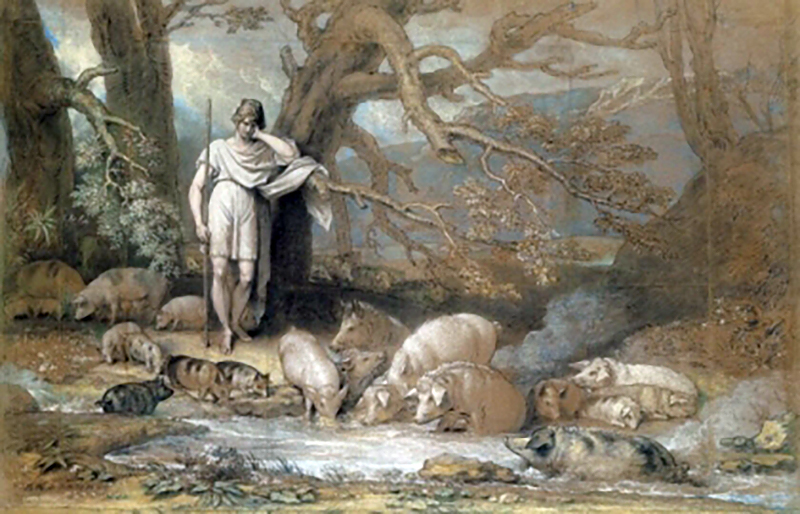 Bath was founded by Bladud, the eldest son of the legendary King Lud.

As a boy, Bladud contracted leprosy and was banished to Swainswick to become a pig farmer.

One day as he was watching his pigs, Bladud noticed that some of the pigs were rolling around in the thick mud and he went to take a closer look. The mud was hot, and he found that the marsh was fed by a bountiful hot spring. Noticing that the pigs scurvy had been cleared up by the mud, Bladud himself started to roll in it, smothering his whole body from head to foot. His leprosy soon disappeared. When he was clear he ran back in delight to his fathers court and in time was made King. In gratitude he built a temple by the hot spring and founded the city of Bath.

Among the most significant Celtic works of art of Roman Europe is the outstanding sun gods head that welcomed pilgrims to the temple of Sulis Minerva in Bath. Within its garlands of druids oak leaves and framed by great serpentine locks of hair, the head of the Celtic sun god glowered all-seeing from its Roman temple pediment,
transfixing Roman and Briton alike.

Although Bath was in fact built nearly 1,000 years after Bladud, it was without doubt a major Celtic place of power. The Celtic Dobunni guarded this most sacred site with five hillforts which dominated the hot spring from their surrounding hilltops. Most distinguished are the Celtic forts at Lansdown and Solsbury Hill. In a druids grove by the hot steaming spring, the goddess Sul was worshipped as the guardian to the gateway to the Underworld. Through major gateways such as Baths hot spring, the Celts believed that deities and ancestors could be approached.

The Romans had a genius for appropriating local deities and blending them with their own gods. So, Sul became Sulis Minerva when they built their temple where the druids grove had stood. Sul, goddess of arcane prophecy, was tempered with the cultured arts and science of Minerva. Like the Celts, the Romans believed that the goddess guarded the entrance to the Underworld.