Burger & Lobster in the Hidden Heart of Bath 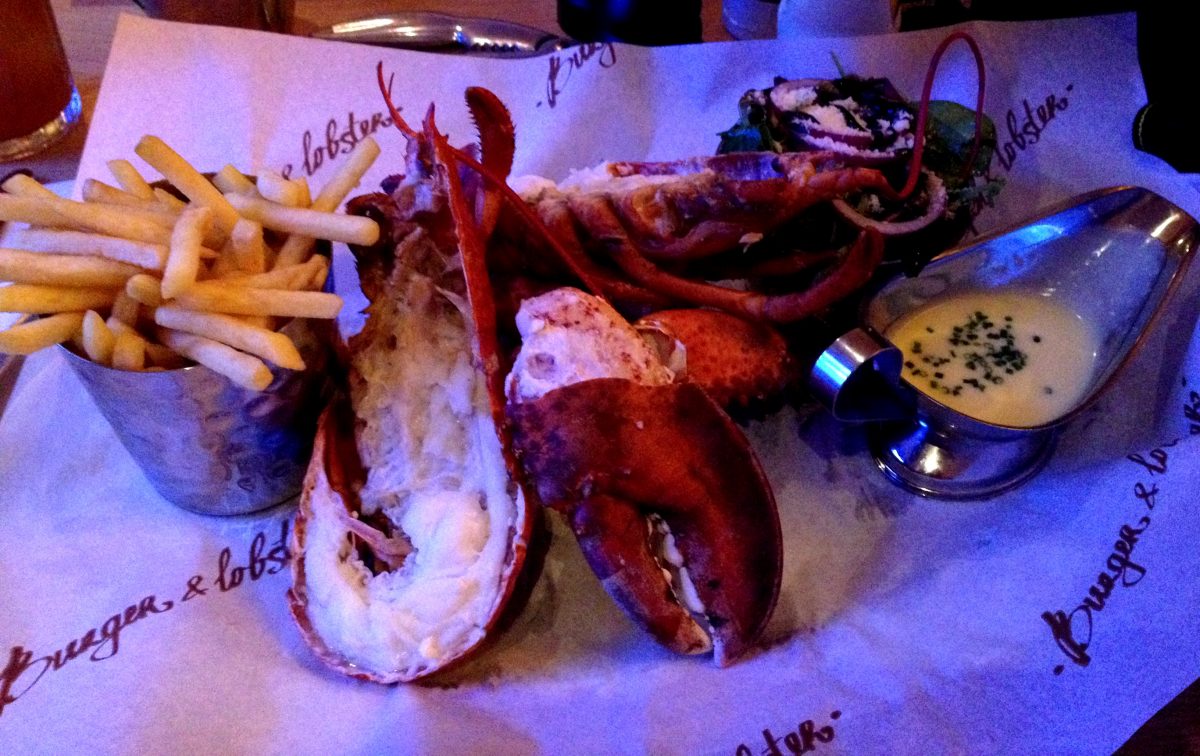 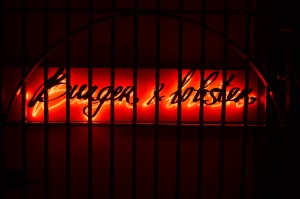 I’ve always been a little bit enchanted by Bath’s Octagon Chapel. Tucked away in the middle of a block of other buildings, it’s almost impossible to spot from the outside, so to make your way along the narrow, winding corridor and then suddenly emerge into space three stories below the chapel’s great dome, with a magnificent chandelier pouring golden light on you from above, is like finding Narnia at the back of the wardrobe. For a long time it’s been somewhat neglected, opening only for the occasional pop-up, but now that Burger & Lobster have taken the space they’ve restored it with love and care, including the beautiful circular balcony that runs all the way around the inside at first floor level. While the restaurant below is cosy and buzzing, the balcony is a lovely option for a quieter and more intimate meal. 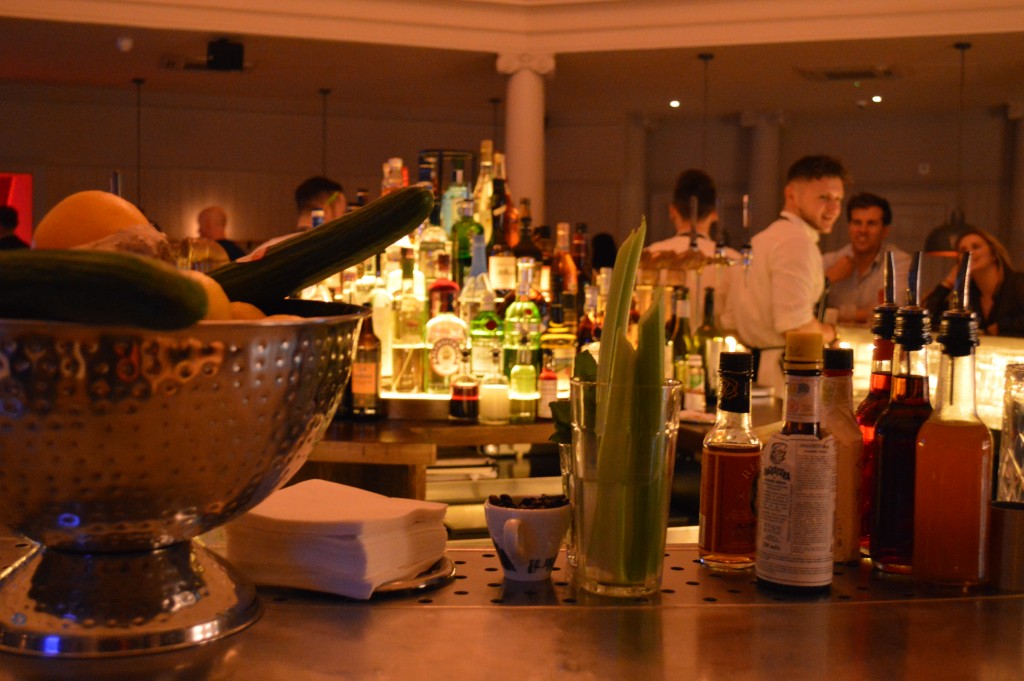 Last week, along with the rest of Bath’s most eagle-eyed and quick-fingered foodies, I managed to nab a table at the soft launch for Burger & Lobster Bath, and we went along filled with anticipation. I’d heard tell from friends in the big city that this small but far-reaching chain (locations include both New York and Stockholm, as well as London) was something just a bit special, and I couldn’t wait to try it. Although the drinks menu – masterminded from the centrepiece of the space, a great circular bar with a tower of artfully lit liquor bottles in the middle – is both varied and tempting, the food menu is so simple it doesn’t actually exist. The name of the restaurant says it all – you can have burger, or you can have lobster, or you can go somewhere else. 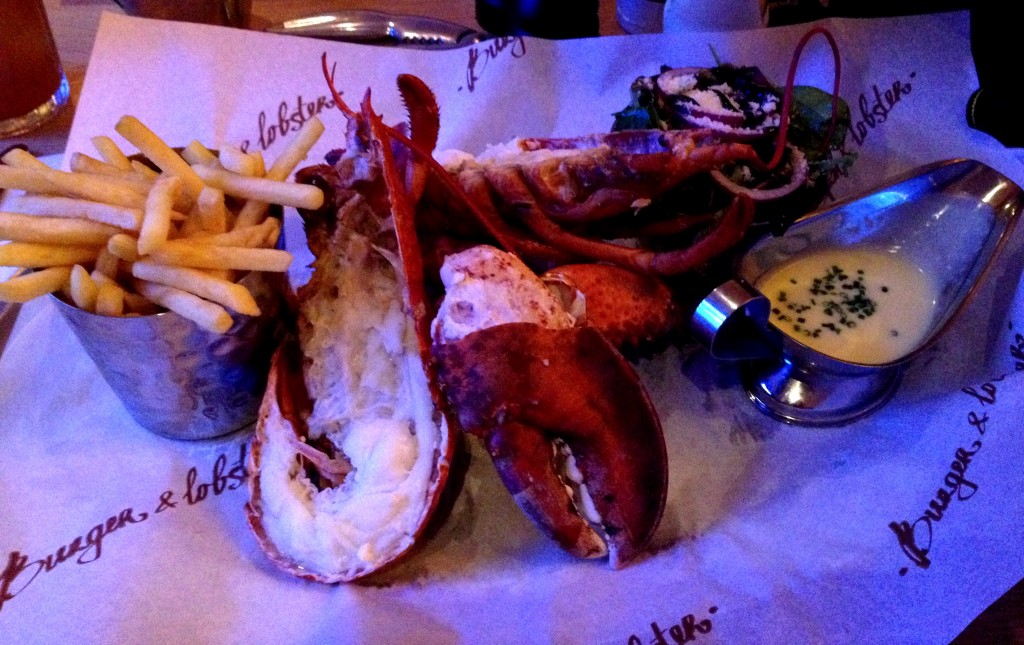 When the food’s this good, though, you only need two options. After a quick chat with lovely staff member Amelia, I ordered my lobster steamed and served with garlic butter, and my dining companion went for the burger. Normally, I must confess, I’m one of those annoying people who spends ages poring over the menu and trying to decide, but the lack of choice made a rather refreshing change. To wash it down, I ordered a Burger & Lobster iced tea, made with Earl Grey (delightful) and my dining companion went for a bottle of Stoney Bonk from locals Honey’s Midford Cider – a cheeky little combination of cider and ginger beer that I’d highly recommend. 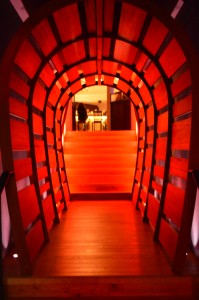 Now, I must admit something – I’ve never actually tackled a full shell-on lobster before. I was slightly alarmed when Amelia returned and equipped me with a bib and various frightening-looking pieces of metal torture equipment – we were sitting opposite the tank and I wondered if I might have to dive in there and wrestle one to the death – but thankfully when my lobster arrived it was beautifully cooked, and cracking it open turned out not to be quite as tricky as it looks (thanks for the quick tutorial, Amelia). Although I did try the burger and it was very good, I totally lost my heart to the lobster, the beautifully dressed salad, and the incredible jug of garlic butter that came with it. In fact I was so enamoured that I pretty much forgot to eat my chips until the end, and I think that says everything you need to know.

With such a minimal menu, I wasn’t sure what to expect from dessert – well, ok, to be completely honest I wasn’t expecting it to be very good. We were given two options – berry cheesecake and Snickers chocolate mousse – and we went for one of each. The cheesecake was beautifully creamy and rich, but the mousse was the standout for me – topped with chocolate cornflakes and with peanuts and salted caramel at the bottom, even though I was absolutely stuffed with lobster I couldn’t resist polishing it off.

All in all, I was heartily impressed by the newest addition to Bath’s restaurant scene. The food was fabulous, the service excellent and the location completely stunning. Since plenty of people have mentioned it to me, I will agree that £20 is probably too much for a burger, however good, but £20 for a lobster is pretty darn reasonable – and if you have one of each, as we did, it evens out pretty well.