Ben Franks: The Story of When in Rome Wines

When I first met Rob Malin, the man behind the label of When in Rome wines, my impression is that this is a man who loves his brand new business. It was his first day at Bath’s Farmers Market and a wet one at that – but Rob nonetheless walked with a wide smile, putting the gridlocked carpark and dripping rain behind him to introduce himself to us as the market drew to a close.

His bag in the box idea is an import from Italy, where many wines that are consumed domestically and enjoyed on a daily basis don’t necessarily ever see the inside of a bottle. Instead, the culture is to fill up empty bottles whenever you please or buy a box that will last some time – enjoying the odd glass of special wine here and there, rather than polishing off an entire bottle in one evening.

One of Rob’s missions is to enlighten the UK market to the benefits of drinking youthful wine from box and join growing markets such as France and Italy, where bag in box wine sales are now hovering at around one fifth of the total wine trade.

Bag in box wine is generally cheaper thanks to the slashing of costs at both the production level, where up to 30% cost can be saved by not bottling, and distribution level, whereby the freedom of glass makes loads lighter, the carbon foot print smaller, and can save up to a staggering 60%.

However with the tradition of us UK folk to lean more towards bottle purchases after centuries of sinking back claret from traditional markets like Bordeaux, we’re going to be a hard one to crack. Just 3% of wine sales in the UK are bag in box and worse still is its sour reputation with consumers for poor quality bulk wine.

Nonetheless, a great place to start persuading the market is with delicious wines – something Rob’s clearly managed to master alongside his business partners Andrea Marchesi and Lorenzo Canali of “La Bottega del Vinaiolo” in Milan. Instead of buying bulk, When in Rome has focused its efforts on working with a variety of excellent small scale producers and thus the team have created a portfolio of not only great tasting wines, but great tasting wines with real character, real story, and a very alluring price tag. 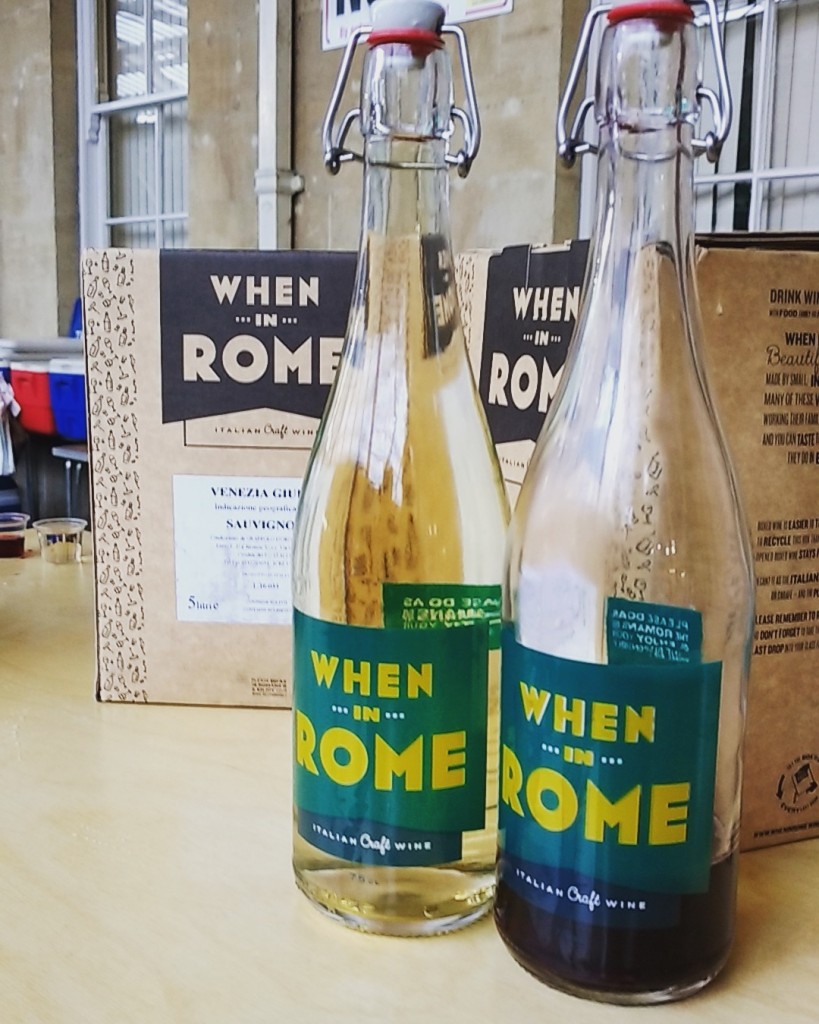 Rob’s not only taken Marchesi and Canali’s successful business model and begun implementing it here in Bath, one of the UK’s premier spots for wine lovers, but has also soaked up inspiration from innovative market leaders like Borough Wines. Borough Wines, based in Hackney of London, import bag in box wine by the palette and hand out refillable bottles to customers to come in and top up with new wines whenever they see fit. The London company’s wine on tap approach to the on trade has proved so successful that their small shop regularly refills a cohort of 600 bottles per week.

When in Rome is looking at the hospitality market here in the south west to replicate some similar success with his range of Italian wines.

It’s clearly superb timing as the on-trade goes through a change towards small plates and social dining, led very much in the south west by both Bath and Bristol. What could possibly be more social than a fantastic wine on tap at great value for a house red or white? Or perhaps popping along to your favourite wine bar to fill up your next bottle of Nero d’Avola when you please? What better way to reignite a romanticism with wine than by buying craft wine from small, characterful producers in some of Italy’s most picturesque locations?

We tried his youthful and fresh Falanghina and a bright, fruit forward Merlot, before going on to a real star in the form of his Sauvignon Blanc produced by the Martincigh family, who reside in the beautiful setting of Azienda Agricola Grappolo d’Oro in the very far east of Veneto’s borders. These alpine vineyards create a Sauvignon that’s zippy and tropical, as though the tart wines of Sancerre had merged and mixed with some of the fruitiest expressions of New Zealand Marlborough.

While I could go on for some time trying to persuade you that When in Rome’s wines are both quaffable and excellent value, really you should just pop down to the Bath Farmer’s Market on Saturday and try it for yourself. Cut away your prejudices of those bagged sweet Tempranillos and try some of Italy’s character with an open mind.